Why training is necessary for every firearms owner

Training with guns can be a very expensive endeavor. Most quality training costs over $400 and that is not including ammunition or travel expenses. While firearms training is phenomenal and should be done by all firearm owners the cost is too much.

One of the few reasons Nautilus Ammunition was created was to provide the people with ammunition. Nautilus wants everyone to train and by lowering the cost of our ammunition (our motto is Ammunition for The People) is one of the many ways Nautilus can help.

Training is a necessary part of being a responsible firearms owner. Who doesn’t want to be accurate with their firearm?

All you need to know about appendix carrying

Conceal carry can vary depending on the gun being carried and location. This article will delve more specifically on appendix carry.

Appendix carry has great advantages, other than being the current fad. One advantage is the ease of draw. The draw is faster than a side carry specifically while concealed with a shirt over it.

In appendix the non-shooting hand lifts the clothing up out of the way, and the shooting hand can draw the gun freely. Keep in mind most self defense shootings happen within 0-7 yards according to the FBI.

Appendix carry allows for quick access to the gun and as you draw you can shoot the gun with one hand as the non-shooting hand is handling the clothing.

Try side carrying and drawing from concealed with some article of clothing over it. Removing the clothing can delay the draw or get the gun tangled in the clothing. Appendix also helps keep the gun secure in a scuffle. Since its in front, the chances of it getting removed are far lower than side carry and low of the back carry. 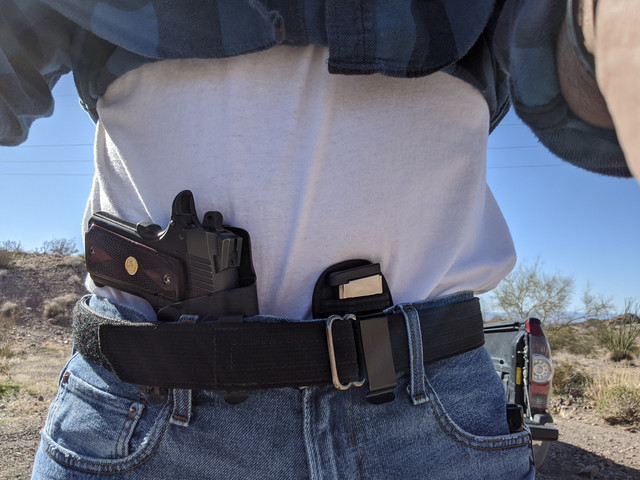 You can become proficient enough in any form of conceal carrying but with no training you might as well not carry. Train as much as you can since you are depending on a firearm to save your life. Do not be fooled by your ego, learn and practice.

A MESSAGE FROM OUR FOUNDER

Hello and thank you for your support.

Nautilus Ammunition was started out of a basic desire to produce high quality ammunition. As an avid shooter, I was spending upwards of $1,000 dollars a month on standard range ammo. I noticed every time I visited a gun store there was a new gun owner buying a cheap firearm and only one or two boxes of ammunition.

That is simply not enough to be confident with a new gun, much less a brand-new shooter. With the average number of new gun owners rising by millions every quarter, we have seen more and more instances of issues stemming from lack of training and practice.

Our motto is simply this – “AMMUNITION FOR THE PEOPLE”. When we realized the margins that dealers and wholesalers are making off shooters, we knew we had to do something. We buckled down and found high quality components, top of the line loading equipment and studied common load specs like they were a treasure map.

We make the ammunition in Florida and ship it nationwide (excluding commie states) directly to you, the customer, for prices not often beaten by steel case.

Why? Because it all comes back to our motto.

“AMMUNITION FOR THE PEOPLE“

Thank you for subscribing!

Thank you for subscribing to our newsletter.
Get 5% off your first order with this code: